IOK Journalists Protest against Assault on A Photojournalist in Tangmarg 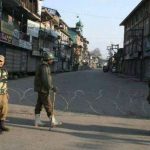 ISLAMABAD: Journalists held a demonstration in Tangmarg area of Baramulla district against an assault on a photojournalist by a government official, in Indian Occupied Kashmir.

The journalist, Sajad Hameed, who works as a photojournalist with Kashmir Times, said that he was performing his professional duty and covering a protest by locals against Public Health Engineering (PHE) department when the Tehsildar pushed him multiple times and asks him to close his camera, Kashmir Media Service reported.

Sajad Hameed said that despite introducing himself as a journalist to the Tehsildar, he was verbally abused, insulted and pushed.