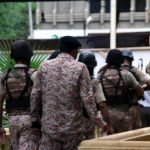 Pakistan Press Foundation (PPF) has expressed serious concern at the entry of the Pakistan Rangers into the Karachi Press Club (KPC) on July 27 without permission of the club. PPF stressed that it is essential that law enforcement agencies respect the integrity and independence of press clubs so that they can continue to function as safe spaces for free expression.

A press release issued by KPC Governing Body said that the “sanctity of the club had been trampled”  and demanded the Director General Rangers to take immediate action against the personnel responsible for this action.  According to KPC Secretary Arman Sabir, Rangers personnel entered the KPC “without informing them and conducted some security rehearsal there.”

The Pakistan Federal Union of Journalists (PFUJ) took serious notice of the raid.    A statement issued by PFUJ President Shahzada Zulfikar and Secretary General Nasir Nazir termed it as “uncalled for and an act of terrifying the journalist community. It’s an act which has desecrated the sanctity of the press club and cannot be tolerated.”

The PFUJ statement added that “the media and journalists cannot be deterred by such low and dirty tactics and methods which bring a bad name to the country and raise questions on the capacity of the Sindh and federal governments.”

The PFUJ demanded an immediate  probe into the incident through a three-member judicial commission of judges from the Sindh High Court (SHC).