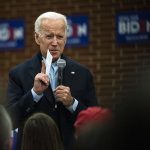 The Urdu service of Voice of America (VOA) has landed itself in the middle of a struggle between America’s two major parties — Republican and Democratic — to win over Muslim votes.

Some Urdu journalists may lose their jobs for airing a video that favours Democratic presidential candidate Joe Biden.

There are only 3.5 million Muslims – about 1.1 per cent of the total US population – and apparently that’s why no party made a serious attempt to grab Muslim votes in previous elections. But this election is different.

And this point was also highlighted in the revised Urdu content of the July 22 video, which initiated the probe. “The number of Muslim voters in several key US states could play a significant role in the upcoming presidential election. In the 2016 election, President Trump won Michigan with less than 11,000 votes. The number of Muslim voters in this state is 1.5 million,” the post noted.

The video, posted on VOA Urdu’s website with logos and subtitles, featured clips of Mr. Biden speaking at a July 20 Million Muslim Votes event that was organised by nonprofit Engage Action. In the video, he promised to undo President Donald Trump’s alleged anti-Muslim measures “on day one” and urged Muslims to vote for him to defeat “Islamophobia”.

About a week after it was broadcast, some pro-Trump groups forwarded the video to Michael Pack, the CEO of the US Agency for Global Media (USAGM), which runs VOA. He immediately ordered a probe to determine how and why this video was broadcast. “Staff members who attempt to influence American elections will be held accountable,” he said in a statement.

The statement noted that two of Mr Trump’s biggest congressional foes — Democratic Congresswomen Ilhan Omar of Minnesota and Rashid Tlaib of Michigan — also “made appearances in the video”.

The USAGM statement underlined the importance of Muslim voters in the November 2020 elections.

US media reports said that “several VOA Urdu employees” were being probed for broadcasting the content while Mr Pack said that once the probe was over, those found responsible would be “dealt with swiftly and fairly”.