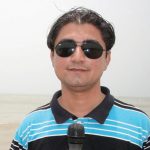 KARACHI: The administrative judge of the antiterrorism courts on Tuesday remanded in police custody a suspect detained in a case pertaining to possession of illicit weapons.

Police claimed to have arrested Kamran, alias Zeeshan alias Shani, who had been reportedly sentenced to death in the murder case of Geo News reporter Wali Khan Babar, for possessing illicit arms.

Babar, a 28-year-old television journalist, was driving home from office when he was shot dead in Liaquatabad on January 13, 2011.

An anti-terrorism court in Kandhkot had awarded death sentence to Kamran and Faisal Mehmood, alias Mota, in absentia while four convicts were given life imprisonment in the murder case on March 1, 2014.

On Tuesday, the investigating officer produced the suspect before the ATCs administrative judge on expiry of his physical remand in an arms case.

The IO mentioned that the suspect was also required to be further interrogated in connection with the murder case of Wali Babar in which he was reportedly avoiding arrest for 10 years.

Allowing the request, the judge remanded him in police custody, till July 4, with direction to the IO to produce him on next date along with an investigation report.

According to the police, Kamran along with his accomplices, all allegedly belonging to the Muttahida Qaumi Movement, had killed Wali Babar over his reporting against the MQM.

Kamran was arrested in a joint operation conducted by the Special Investigation Unit and a federal intelligence agency.

Initially, the police had named eight accused, including Liaquat Ali, who was killed in an encounter.

According to the police, several witnesses connected with the case were murdered, including Rajab Bengali, who was killed in 2011. Another ‘star’ witness Haider Ali, on whose testimony the conviction had taken place, was also killed in 2012.

Advocate Naimat Ali Randhawa was also murdered in September 2013 while he was pleading the case as a special public prosecutor.

According to an alleged confession of Zeeshan, the MQM-London South Africa group was involved in the journalist’s murder.