KARACHI: Two media houses were ransacked as activists chanting pro-MQM slogans went berserk on Monday evening after listening to the highly provocative speech of their London-based chief Altaf Hussain and resorted to a violent protest, firing and arson that left at least one person dead and a dozen others wounded in an attack reminiscent of the May 12 assault on a private channel, drawing condemnation along with directives for immediate arrest of culprits from the army chief.

A police mobile van and a motorbike were torched while several other vehicles were damaged amid the wave of violence that turned the Saddar area into a battle ground between law enforcers and protesters. Police said the protesters opened fire besides hurling stones at them and cameramen of three TV channels. Police fired teargas shells to disperse the mob besides resorting to a baton-charge, said a senior police officer of Karachi-South, Saqib Ismail Memon.

Later in the evening, the Sindh Rangers launched a full-scale crackdown against the MQM, arresting its senior leaders — Dr Farooq Sattar, Khawaja Izhar-ul-Hasan and Aamir Liaquat Hussain — raided the party’s Nine Zero headquarters and its Khurshid Begum Complex, which were in control of the MQM women activists, with men already having gone into hiding.

It all started when Mr Hussain made a highly provocative speech at the hunger strike camp the party set up a week ago outside the Karachi Press Club in which he instigated his workers to attack the TV channels. Witnesses said that a number of MQM workers, including women, marched towards Zainab Market from the press club and surrounded the Madina City Mall, which housed the ARY TV and Neo TV offices.

MQM leaders Farooq Sattar and Khwaja Izharul Hasan as well as around 15 party workers taken into custody
DSP-Saddar Kanwar Asif told Dawn that the police tried to stop the unruly mob and save the people but they attacked the police. “Women and children were leading the protest, followed by some ‘criminal elements’ who opened fire on us,” he claimed.

The mob injured security guards at the offices of the TV channels, particularly ARY, who put up resistance, and hurled stones at policemen and staff.

Police said that they resorted to a baton charge and lobbed teargas shells to disperse the mob, but the latter fired at the law enforcers, set fire to a police mobile van and the motorbike of a policeman, and damaged public property. 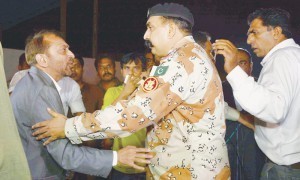 The violent episode continued for around 45 minutes. Traffic was suspended on the busy roads of Saddar and adjoining areas for a considerable period during the violence, causing immense inconvenience to the people. Zainab Market and other adjoining markets were immediately shut after the violence erupted.

The protesters returned to the hunger strike camp at the KPC and hurled stones at the club and used abusive language against media persons, the police added.

However, contingents of the Rangers and police rushed to the spot and took a dozen MQM workers into custody and smashed the hunger strike camp.

The deceased was identified as Arif Saeed. MQM leader Wasay Jalil claimed that he was a worker from Liaquatabad and killed “because of police firing”.

Some of the injured persons were identified as Safeer, cameraman of Samaa TV, Rehan, cameraman of Neo News channel, Usman, cameraman of 24 Channel, Mrs Farhana Begum and Mrs Farah Mudasir, Saad Sultan and Arif Raees, all sustained wounds caused by hard and blunt weapon and were later on discharged. Noman who sustained gunshot wounds in the neck and arm and Aslam with bullet injuries in his leg got admitted to the JPMC for treatment.

Following the violence, MQM leader Dr Sattar came to the press club to address a press conference, but Rangers stopped him and asked him to accompany them. After brief resistance, the Rangers took MQM leader along with Khwaja Izhar into their custody and shifted them to an undisclosed location.

Till our going to press, heavily armed contingents of Rangers were still searching the MQM headquarters and nearby houses. In other parts of the city, the paramilitary force continued with organised raids, arresting dozens of members and activists of the MQM, reportedly including some members of the national and provincial assemblies.

Followers of Karachi politics said that the Rangers’ late-evening move to arrest all prominent members of the MQM came following a phone call from Chief of Army Staff Gen Raheel Sharif to the director general of the paramilitary force. Though details of the conversation were not made public, it was widely believed that the Rangers were given a free hand to arrest all those MQM activists who were directly or indirectly linked to the party and were apologists for the MQM supremo even after his controversial speech.

The attack on the media houses and the provocative speech of the MQM chief drew widespread condemnation from every quarter, including Prime Minister Nawaz Sharif, Sindh Chief Minister Murad Ali Shah.

Even a woman lawmaker of the MQM, Irum Azeem Farooque, took to Twitter and announced quitting her party and the membership of the Sindh Assembly.

“We will not allow anyone to chant slogans against Pakistan and make hostage the citizens,” said CM Shah while presiding over a high-level meeting on Monday evening. He also directed the Rangers chief and the inspector general of police to make sure that life and properties of the citizens living in Karachi were safe.

The police were directed to enhance security at offices of print and electronic media.

Meanwhile, in their brief response to Mr Hussain’s speech that resulted in attacks on media houses, the British police said: “We are aware of media reports concerning an attack on a media house in Karachi. This is a matter for Karachi law enforcement.”

The News: A pernicious attack on press freedom