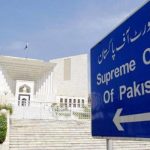 ISLAMABAD: As the Supreme Court resumes hearing a contempt of court case against senior journalist Matiullah Jan on Thursday (today), the capital police furnished a report conceding that they are still waiting for replies from different departments the assistance of which they had sought to unearth the kidnapping incidence of the journalist.

“But efforts are under way to trace the culprits involved in the incident and in this regard the reports of various departments is awaited to carry out further investigations,” stated the 52-page report furnished before the Supreme Court on Wednesday by the deputy inspector general (operations) on behalf of Inspector General of Islamabad Amir Zulfikar Khan.

In its last order issued on July 22, a three-judge SC bench headed by Chief Justice Gulzar Ahmed had ordered recording by the relevant police station of the statement of Matiullah Jan about the kidnapping incident.

Matiullah Jan was kidnapped from Islamabad on broad daylight on July 21 — a day ahead of his appearance before the Supreme Court in the contempt of court case — but was released in the midnight after a hue and cry raised by journalists, civil society members, human rights organisations and different political parties.

In its report, the Islamabad police stated that a five-member special investigation team (SIT) headed by the superintendent police (investigations) was probing the abduction incident, adding that police had soon after the kidnapping of the journalist approached the Ministry of Defence with a request to ascertain his whereabouts from the Intelligence Bureau, Military Intelligence and Inter-Services Intelligence so that investigation could be concluded on merits.

According to the report, the investigating officer also sent letters to all hospitals in the federal capital, Edhi centres, the health secretary, in-charge press club, inspectors general of Punjab, Sindh, Khyber Pakhtunkhwa, Baluchistan and AJK, Pakistan Railways and the secretary Fata and prisons with a request to ask their respective staff to check the record of their respective organisations and if any fruitful information was found then informed the local police for further legal action in accordance with the law.

The report stated that written directives were also sent to the superintendent police (investigations) for conducting geo-fencing of the place of occurrence to trace the kidnappers. Moreover, it added, all police stations of the adjoining districts were asked through wireless messages to check if the journalist was involved or arrested in any criminal case in their area of jurisdiction, but as per reports the journalist was neither involved in any criminal case nor arrested by any local police.

The report said a written request was also sent to the quarters concerned for obtaining CDR of mobile phone number of the journalist, in addition to a written request to the director of Safe City Project for provision of CCTV footage of the place of occurrence, which is still under process.

The report explained that the CCTV footage of the alleged suspects was also sent to the National Database and Registration Authority on July 24 for matching of the suspects or their particulars, which is still under process. It said verbal directives as well as written orders had also been issued to the SIT members to peruse the FIR and case file to ensure apprehension of the culprits involved in the crime without further delay.

Police had assured that all possible resources would be utilised to locate and arrest the accused involved in the crime and no stone would be left unturned in this regard, the report said, adding that the SIT members had been directed to apprise the authorities concerned of the progress in investigation into the incident on a daily basis.

The report stated that the police department and SIT members were in close contact with the victim and other relevant departments and every effort would be made to take the case to its logical end.