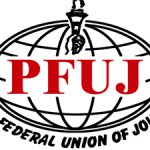 KARACHI: The Pakis­tan Federal Union of Journalists (PFUJ) has urged the government to withdraw the reportedly politically motivated cases against Jang-Geo group’s owner Mir Shakilur Rehman (MSR) and probe into the “harassment being faced by his family”.

In a joint statement, PFUJ president Shahzada Zulfiqar and secretary general Nasir Zaidi said that after Mir Shakil’s arrest his wife and children were being harassed and chased.

The issue has also been highlighted by a New York-based human rights organisation, which has demanded that “politically concocted, fabricated cases” be dropped against MSR.

The media industry, they said, was under serious threat and this situation had been created deliberately.

Earlier, Channel 24 was shut and its licence was suspended on petty grounds, they added.

The PFUJ also demanded the release of Rs 6 billion to news organisations, which was still pending with the ministry of information and broadcasting.

They said the release of money would help resolve the financial issues faced by the media houses like nonpayment of salaries and clearance of dues.

“This situation, which is being created by ill-conceived policies will harm relations between the government and media, ultimately hindering democracy in the country,” the PFUJ statement added.