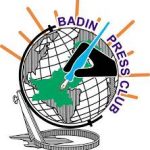 BADIN – A senior journalist and his cameraman received thrashing at the hands of enraged mob here on Thursday.

As per details, people from Mallah community went to a bank near Kazia Wah for borrowing a loan that suddenly a dispute arose with the bank staff that soon changed into a confrontation.

Meanwhile, a senior journalist and General Secretary of Badin Press Club Shoukat Memon and his cameraman Bagh Ali Junejo also arrived at the site to cover the incident.

But the enraged mob did not spare them either. They pounced upon them, beat them up and also snatched camera and mobiles from them.

Taking notice of the incident, SSP Badin Shabbir Sethyar directed the SHO concerned to get to those responsible for beating the bank staff as well as the journalists and put them behind the bars.

Police were conducting raids to arrest the culprits till the filing of this news.

Following the incident, a large number of journalists reached the Badin Press Club, and unanimously condemned the incident.

They demanded immediate justice for the journalists who were beaten up by the hooligans and also asked the government to provide protection to the journalistic community.