SHC seeks details on detention of Omar Sheikh, others 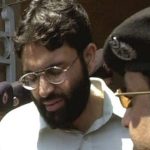 KARACHI: The Sindh High Court on Thursday sought details about the powers of federal and provincial governments regarding detention of prisoners on a petition challenging the detention of four men set free by SHC after setting aside the trial court order in the abduction and murder of American journalist Daniel Pearl.

The two-judge bench headed by Justice Mohammad Iqbal Kalhoro also directed the jail authorities to allow the parents of Ahmed Omar Sheikh to meet him as per the jail manual.

Sheikh, Fahad Naseem, Salman Saqib and Sheikh Adil through their counsel moved the SHC against the provincial authorities for detaining them since their acquittal in April.

The provincial home department and jail authorities filed comments and submitted that on April 1, the petitioners were detained for three months under Maintenance of Public Order Ordinance, 1960 and in July their detention was extended for another three months under the Anti-Terrorism Act, 1997 for alleged affiliation with terrorist organisations and involvement in terrorist acts.

The bench directed the lawyer for petitioners to file rejoinders till next hearing and observed that the petition will be decided after hearing arguments from both sides on Sept 15.

The counsel for the petitioner argued that the parents of Omar Sheikh came from London to meet him, but the jail authorities have not allowed them to do so.

He also questioned the authority of the provincial government to detain people under the antiterror law and argued that only the federal authorities could issue such detention orders under the ATA.

The petitioners contended that the provincial authorities had ordered their detention on April 1, shortly after the judgement of SHC on their appeals for three months under the MPO and on July 1, the provincial home department issued another notification imposing another three months detention under Section 11-EE of ATA after including their names in the fourth schedule.

The lawyer argued that the petitioners have been behind bars for the last 20 years and despite being acquitted they have not been set free. He maintained that the detention was not in accordance with law and pleaded to set aside the notification.

On April 2, a two-judge appellate bench of SHC acquitted all the appellants from the charges of murder and kidnapping for ransom and only found main accused Ahmed Omar Sheikh guilty of abducting the slain journalist and sentenced him to seven-year imprisonment. However, the sentence had been served since the convict had already spent around 18 years in detention.

An anti-terrorism court at Hyderabad had sentenced Sheikh to death in 2002 for murder and kidnapping of the 38-year-old South Asia bureau chief of The Wall Street Journal for ransom and co-accused were awarded life term for helping the main convict in abduction and demanding ransom of the slain journalist.

The provincial government and the parents of the slain journalist have filed appeals against the SHC’s order before the Supreme Court.