Sub judice or not 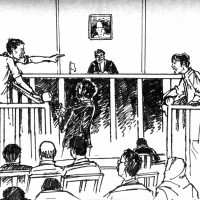 When journalists in this country portray certain politicians as the embodiment of corruption, they are not expecting to be hauled up by the Supreme Court. Yet that is exactly what happened in the aftermath of a political talk show hosted by Arshad Sharif, aired on ARY News on August 28, 2018.

In the show, Sharif, while discussing proceedings pending before the Supreme Court hinted that former president and Pakistan People’s Party (PPP) Co-Chairman Asif Ali Zardari had not been entirely honest when furnishing details regarding his ownership of property. He then went on to discuss two, allegedly contradictory, affidavits filed by Zardari at different points in time. Not content with pointing out the ostensible factual inconsistency, he sought — and furnished — opinions on which of the two affidavits represented the truth. This led to suo motu case No 28 of 2018, in which a three-member bench of the Supreme Court laid out, and affirmed, standards to be followed when commenting upon sub judice matters.

In simple terms, ‘sub judice’ refers to a matter being under judicial consideration. At the heart of this latest Supreme Court case is the rather difficult exercise of striking a balance between freedom of expression and ensuring that reputations and actors involved in cases covered by the media are not prejudiced.

So how do you know if you are going too far in commenting upon sub judice matters? For starters, broadcasters have to abide by Electronic Media (Programmes and Advertisements) Code of Conduct, 2015. The next thing to be mindful of, as per the Supreme Court, is the balance to be struck between your right to express your opinion versus another person’s right to a fair trial as well as their right to be dealt with in accordance with law. Comments upon sub judice matters have not been banned but they will, as per the law laid down by the top court, have to be ‘objective’ — and not ‘subjective’. PEMRA’s licensees (i.e. television and radio channels) are now bound to ensure that no material capable of prejudicing judicial determinations, trials or ongoing investigation is aired.

To the optimist, the ruling is an important step in reminding the media of its responsibilities in a time of deep political division. There is no shortage of those who have suffered harm to reputation and dignity because of unforgiving attention from the media. To the cynic, there is unmistakable irony in an activist court chiding media houses for shaping perceptions through sound bites instead of focusing only on facts. Nuance requires borrowing from both perspectives.

At the risk of stating the obvious, media channels can make or break reputations if they decide to be with or against you. Sure, you can take them to court for defamation to clear your name but a lot of damage has usually occurred by then. There is great merit in ensuring that there are pre-agreed rules of the game that the media does not violate — especially in matters as emotive and divisive as high-profile court cases.

It is deeply frustrating to watch people who are not lawyers pretending to be legal experts and opining on pending cases, however, some of this is a necessary evil.

But who should lay down the rules? Should it be the state or would self-regulation by the media be a better model? In this instance, the top court has built on top of what the state had already prescribed through a Code of Conduct. For those who believe in restraint, the top court could have left the matter at calling for the implementation of the Code of Conduct. But it went further, much further. Should this be celebrated?

The answer depends on whether you trust the state — in each relevant context — to prescribe rules that would be fair and narrowly tailored without trying to suppress free expression or legitimate criticism. For now, you and I do not have much of a choice — there is a statutory Code of Conduct, additional directions from the top court and a Supreme Court ruling to support the implementation of this framework.

No one would argue that the media should be free to cause or fan prejudice in sub judicematters. A trial by media can be deeply traumatic and scarring — for individuals involved as well as the system. But the hard fact is that each instance of prejudice stems from a unique context, with its own facts. Arshad Sharif’s case is just one example; should the apex court have used this one case to impose a judicially crafted set of rules telling media houses what they can and cannot say? The cause of striking a balance between fair trial and free speech is not well served when general — instead of specific fact-based — balancing exercises are carried out.

The criteria defined by the court when it is talking in general terms, instead of in specific cases, will always be overbroad. This is just the nature of the exercise. Laying down a broad set of general rules always results in vague standards that have to be concretised in individual cases. Normally legislatures or the executive (through secondary legislation) lay down general rules; the courts stick to deciding specific cases. In matters relating to free speech, I am not keen to celebrate the judicial writing of general rules to control speech.

Of course, as a lawyer and citizen, it is deeply frustrating for me to watch people who are not lawyers pretending to be legal experts and opining on pending cases. Some of this, we should remind ourselves, is a necessary evil. Democracy, to quote Amartya Sen, is ‘government by discussion’. Not every opinion we disagree with is prejudicial to a case or an individual — and we must be cognisant of the dangers of using a straw-man to craft prohibitions broader than absolutely necessary. The line that we are trying to draw is thin so being circumspect and sceptical makes sense. Judges and lawyers are not easily prejudiced by the media; they often approach cases with their own, more silent, pre-conceptions or convictions. Of course, juries in trials and the public, in general, should not be hostage to the media — but those are calls to be made in individual cases.

Consider some of the problems that may arise as a result of the court’s broadly worded directions. What does it mean that a media channel cannot air ‘subjective’ comments on pending cases? Is it within or outside the bounds of the law to televise a debate between two constitutional law scholars arguing over what arguments are likely to weigh with judges in a sub judice and landmark case? Is discussing how individual judges read the Constitution an ‘objective’ (allowed) or ‘subjective’ (prohibited) comment? Is calling a judge a conservative or liberal an exercise in fact or opinion? There will likely be increasing uncertainty about this in the coming days. A possible downside is that people and media outlets will engage in self-censorship; this would be tragic.

There is a strong case to be made that Arshad Sharif crossed a line; he wanted to cast doubt upon the veracity of two documents that were to be judicially examined, and ruled upon, in a pending case. He apologised and undertook not to repeat his conduct. The matter could have ended there, but it did not. Has the apex court clarified the law and struck the appropriate balance? Or will this lead to more questions and uncertainty in the coming days?