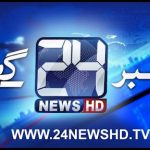 The complaints were lodged over portions of a Dua read after Asr prayers. The regulator said it had issued an advisory to all television channels on Aug 20, directing them “not to air material that would harm inter-faith harmony or which is based on sectarianism and inciting hate”.

The press release issued by Pemra said the 24News channel, which is a part of the Central Media Network, aired “hate material during its special Muharram 10 transmission without exercising any editorial control”, thus violating Pemra’s directives.

The authority added that it took “prompt action” and suspended the channel’s licence under section 30(3) of the Pemra Ordinance.

Pemra said a show-cause notice had been issued to the channel, seeking a reply within 14 days. The licence will remain suspended until completion of the inquiry.

In a statement, the TV channel acknowledged that negligence was committed on its part, but added that the contents had gone on air because staffers were not well-versed in Arabic.

“We did not know what was being read out,” Mian Tahir, the news channel’s director, said. He said he had explained the position to a senior official of Pemra on Sunday.

However, he criticised Pemra for cancelling the channel’s licence, saying that suspension of the licence was an “illegal decision” by the regulator and beyond the scope of Pemra rules.

Mr Tahir said the complainant remained unknown. “Pemra should issue a notice first and give us the chance to explain,” he said.