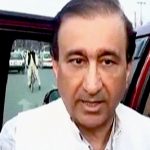 It is pertinent to mention that the Jang-Geo editor-in-chief is in custody for more than 145 days in a case which is of documentary nature. Moreover, the NAB had filed the reference over a property deal reached with the owners of the private land 34 years ago.