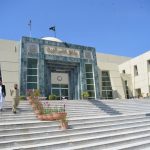 PESHAWAR: The Peshawar High Court (PHC) on Tuesday asked the federal and Khyber Pakhtunkhwa government to submit their comments within 20 days with regard to the judicial commission probing the kidnapping and subsequent killing of a journalist Hayatullah from North Waziristan.

A two-member PHC bench comprising Justice Ishtiyaq Ibrahim and Justice Nasir Mehfuz heard the writ petition filed by the brother of Hayatullah asking the government to make public the report of the judicial commission.

Tariq Afghan Advocate appearing for the petitioner prayed the court that under section 15 of Pakistan Inquiry Commission 2017, the government was bound to publish and make public the inquiry report into the death of Hayatullah.

He informed the court that Hayatullah was kidnapped in December 2005 from Mir Ali tehsil in North Waziristan and his bullet-riddled body was found in June 2006. The court was informed that the then government announced a judicial commission to probe his killing under pressure from national and international journalist organizations and civil society. The PHC had formed the judicial commission under Justice Raza Mohammad Khan. It recorded statements of journalists, security forces officials, his relatives and other relevant people and organizations.

However, the government did not make its report public. In its last hearing, the PHC bench had directed the federal as well as the Khyber Pakhtunkhwa government to submit their comments at the next hearing, but the government failed to do so.

On Tuesday, the two-member bench directed the federal and provincial government to submit their comments within 20 days pertaining to the judicial commission so that Hayatullah’s family and the general public could know that why and who had kidnapped and killed him.